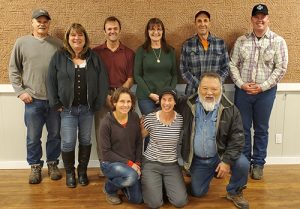 The Rock Creek & Boundary Fair Association held its AGM on Wednesday, November 20, 2019, and elected its new Board of Directors for the 2019-2020 year with 19 voting members present.  The AGM and voter registration was very professionally conducted by 4-H members Wade MacDonald, Jade Fossen, Olivia Schneider and Sophie Schneider.

Finance Committee Chair, Debra Pownall distributed copies of the Notice to Reader Financial Statements prepared by WK Group LLP, as well as an internal Actual to Budget comparison for the year ending August 31, 2019.

General Manager, Lisa Sims, reported on activities and projects throughout the year including major facility improvements such as the installation of heat pumps in the Pavilion funded through the Community Works Fund administered by the RDKB Gas Tax Committee.  The flooring, lighting and ceiling fans in the Pavilion were also upgraded.  The poultry barn was demolished in anticipation of a new poultry/small animal and multipurpose structure being built in the Spring of 2020 with funds raised from 50/50 draws over the past three years.

Green Committee Chair, Dean Corbett, reported on green initiatives implemented this year including the installation of a water refilling station, intended to reduce the amount of water bottles being purchased, as well as the creation of three waste stations where Fair-goers were encouraged to recycle and compost their waste.  The Green Committee is committed to expanding and increasing awareness of the program in 2020.

At the General Meeting, following the AGM, discussions turned to several items of new business.  One item of discussion was the Pavilion washroom upgrades which will take place after Fair 2020 and into the winter of 2021.  This project is funded, in part, by a successful grant application of $58,600 from the BC Gaming Capital Project Grant Program.

Also on the agenda was the 2020 Raffle.  Tickets will go on sale in March 2020 and ticket holders will be entered into a draw with a chance of winning one of two chainsaw carvings made by Ryan Cook of Saw Valley Carvings. Ryan Cook, the wild blonde haired carver from the HGTV & Netflix USA series “Carver Kings” got his start in carving playing the apprentice from the television series “Saw Dogs”. He has quickly become one of the top carvers and most recognized names in the world of Chainsaw Carving. In addition, Ryan will be showing off his carving skills at the 2020 Fair.

And finally, the discussion turned to Fair 2020, and more specifically deciding on a theme for the milestone 75th Annual Rock Creek & Boundary Fall Fair.  The Fair Board and Membership decided to have a contest and request ideas from the public.  If you have an idea for a theme that celebrates the 75th anniversary and the Fair’s agricultural roots, we want to hear from you.  Submit your ideas via email to rcfair.office@gmail.com or mail to PO Box 83, Rock Creek, BC  V0H 1Y0, prior to December 31st.  The winning entry, chosen by the RCBFA Board and Membership, will win a weekend family pass to the 2020 Fair.

President Ilana Fraser closed the meeting by thanking all those who continually support and tirelessly volunteer their time to make the Rock Creek and Boundary Fall Fair an amazing showcase of the Boundary Country.